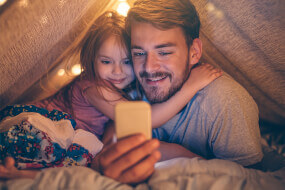 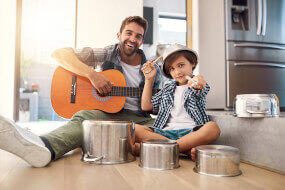 Find out more about where your ancestors along the male line settled thousands of years ago.

The report displays your haplogroup designation and map showing your ancestors' journey and where they initially settled in the old world.

We will explain your results in detail and provides more information about ancestry testing and human migration history.

The Science behind your Paternal Lineage DNA Test

The paternal lineage test is based on the fact that the Y chromosome is passed down from father to child relatively unchanged through several generations. Special sections on the Y chromosome, called short tandem repeats (STRs), are examined to determine a person's Y haplogroup—revealing the geographic origins of his ancestors as evidenced by common DNA markers.

Why can’t a woman take this test?

How does it work?

The science of lineage DNA testing relies on portions of human DNA that are passed from parents to children relatively unchanged through many generations. For the paternal line, we examine short tandem repeat (STR) sections on the Y chromosome, which is passed only from father to son.One could say that by examining these key parts of our DNA, our paternal history could be traced as far back as the first peoples who populated the earth. Scientific data shows that modern humans evolved in Africa 400,000 to 130,000 years ago, and started migrating outward.

What does the test tell me?

The test tells you which haplogroup you belong to on your paternal side. A haplogroup is a population of people who share common markers in their DNA, and it is usually associated with a geographical point and a historical point of origin.Along with your haplogroup, we provide a description of applicable populations around the world where the same haplogroup can be found. These populations can be considered your “genetic cousins.”We also give you the specific DNA markers that allowed us to determine your haplogroup, should you choose to do further research with this data. There are publicly-available databases and forums where you could discuss your results!

Does my biological father have to be swabbed for the lineage testing?

Does the test tell me if I am related to a famous person?

No, it doesn’t. However, certain famous individuals in ancient and recent history have been DNA-tested to determine their haplogroups. These include U.S. President Thomas Jefferson, the Wright brothers (aviation pioneers), and the Romanov family. Historical evidence pointing to Genghis Khan and St. Luke have suggested haplogroups for these iconic persons. If your haplogroup matches that of famous people who have been haplotyped, it will be mentioned on the description page that accompanies your certificate.

Does the test tell me if I have Jewish ancestry?

Certain haplogroups are associated with Jewish ancestry. However, there are varying social and political definitions of what it means to be Jewish, and DNA alone does not determine Jewish ancestry.

Put your existing DNA data to work.
When you order a product you can chose to upload or read your DNA.

Get ready to access latest in DNA discovery in just 3 simple steps.

A little parcel in the mail!

We’ll send you our DNA collection kit, with super simple instructions for collecting a saliva sample.

Once your sample is collected, just mail the kit right back to us. It’s easy, safe, and free!

We will sequence your sample and upload your data in the DNA Vault, so you can access DNA apps instantly!

HomeDNA™ empowers you with valuable information contained in your own DNA and is brought to you by DNA Diagnostics Center (DDC). Established in 1995, the DDC was founded on the belief that technological advancements in DNA testing should translate to services that are accessible and affordable to everyone. They have built an international reputation based on their commitment to reliability, innovation, and value by offering DNA testing services for paternity and other family relationships, forensics, animal breeders and veterinarians, and now wellness-inspired consumers.

Thousands of people across the world use our services to make their lives simpler, more pleasant, and more productive.

I was really impressed with HomeDNA. The kit told me what I needed to know, when to expect my results, how to log in to the website to see them and everything. What I liked best is that I didn’t have to go somewhere to get my blood taken. All I had to do was swab my cheeks and mail the samples to the lab. It was great getting update emails, so I always knew the status of my test every step of the way. I’ve already recommended this to two friends. Thanks for everything.

After I did my first test, I was hooked. I’m already planning on doing another test! The whole process was very simple from beginning to end: swab, mail, view results. The only thing that was close to hard was waiting for results, because I was so excited! But the report was posted on time and the results were clear. I discovered some new things about myself and some things I already knew were confirmed. DNA is amazing. Like I said, I’m hooked!

It doesn’t happen too often where something you buy actually exceeds your expectations, but my test with HomeDNA really was better than I expected. The kit explained everything really simply and told me how long it would take to get results. And then the results were right on time. The report went into a lot more detail than I thought it would, which was a pleasant surprise. Since it was DNA I assumed it would be kind of complicated, but it’s not.